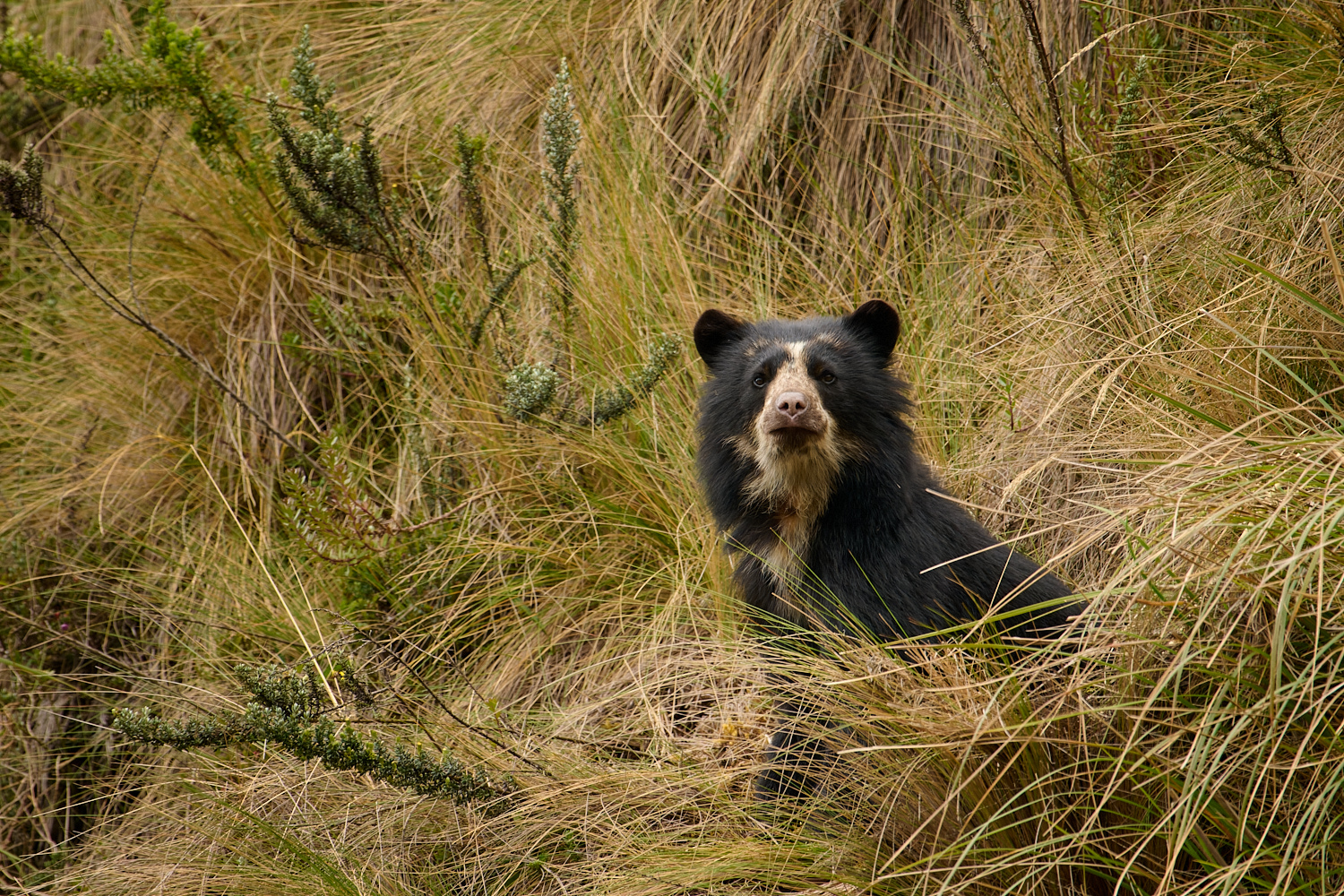 A couple of weeks ago, I went to South America to photograph birds. But as fate would have it, one of the first animals to come into my camera’s viewfinder was a mammal. And not just any mammal! It was the Spectacled Bear – one of the largest carnivores on the continent.

From my previous articles, you’ve probably already noticed that Latin America is my favorite part of the planet that I love to return to. Part of this is due to the beauty of the local landscape and the friendly people. It’s also because of the birds – my favorite animals. In one country alone, Colombia, lives one-fifth of the world’s bird diversity, some 2000 species.

Even more surprising is the apparent absence of mammals in the local landscape. Africa has its herds of elephants, zebras and wildebeest. Australia has kangaroos leaping in great numbers. Millions of bison roamed North America before the arrival of people with guns.

But South America? Small herds of llamas graze in the Andes, tapirs and jaguars live hidden in the dense forests, and Spectacled Bears can be found on the edge of mountain forest and páramo. This is pretty much the end of the list of South America’s large land mammals. Which is why I was so happy to find a Spectacled Bear on my recent trip!

Encounters with this animal are very rare. And no wonder. Although the Spectacled Bear is more than 95% vegetarian, it does occasionally come across livestock, and humans do not forgive this. Add to this the loss of natural habitat, and you have another example of an ecological disaster today.

Although I have spent a few years of my life in the Andes, I have never been lucky enough to have a direct encounter with a bear. I have seen signs of its presence in the landscape, such as excrement or chewed leaves of the bromeliad Achupalla (genus Puya), one of the plants it feeds on. But I have never encountered a live bear. I broke my bad luck only a few weeks ago.

My group was driving towards the Papallacta Pass, the gateway to the Amazon. The road here winds up the mountain slopes to about 4000m above sea level. All around is the high alpine steppe, the páramo. This is where the upper limit of the bears’ range lies. In the relatively open steppe, unlike the mountain cloud forest, they can occasionally be spotted as they wander in search of food.

We scanned the near and far slopes around Antisana volcano with binoculars, but without success. Searching for bears in the vast páramo is like looking for a needle in a haystack. We were gradually moving the car towards the pass when we noticed a couple of cars and people standing around, waving their hands and looking up somewhere. When I rolled down my window, I didn’t even have to ask, and got the answer I was hoping for: “Oso! Oso!”

I immediately jumped out of the car, grabbed my Nikon Z9, and ran to see where the bear was hiding. I happened to have the newest addition to the Nikon telephoto lens family, the Nikon Z 400mm f/4.5 VR S, mounted on my camera at the time. After a quick assessment of the situation, I decided that 400mm would not be enough here. So, I pulled out the 2.0x teleconverter I had in my pocket and mounted it between the body and the lens.

The bear was quite high above the road and was happily sucking the sweet juice from the bromeliads. After all, the local name Achupalla originates from the Spanish verb chupar, meaning to suck. But if you want to taste the bear’s diet, forget it. The leaves are very tough and have sharp spines. The feasting bear, however, resembled a teenager sitting in a cinema with a bag of crisps. He was clearly enjoying himself, paying no mind to the commotion from the cars and people below.

On the other hand, I didn’t much like the view from below. The bear was obscured by the surrounding vegetation, and most of all, I like to photograph animals from eye level. I had no choice but to head upwards, through the rocky and thick bushes and grass-covered páramo.

I didn’t walk directly toward the bear, of course. I kept a respectful distance. First of all, I didn’t want to disturb the bear at all. Moreover, I’ve already mentioned that about five percent of a bear’s diet consists of meat; I had no desire to contribute to this marginal component with my own flesh.

Breathless after scrambling up the hill, I lay down in a relatively stable position and put the camera to my eye. At that moment, I was looking at the bear through an 800mm lens with an f/9 aperture. I regretted a little that I hadn’t reached for the new Nikon Z 400 mm f/2.8 TC VR S, which I also had with me on the trip; it was lying idle down in the car (more on that lens in a future article). Anyway, at least I had made it up the hill with the lighter lens.

I was pleasantly surprised that even with the f/9 aperture, the camera could find not only the bear, but also its eye. However, it was necessary to set a really fast shutter speed (around 1/1000s), as the combination of excitement and lack of oxygen took a toll on the stability of my hands. At that moment, I was admiring athletes in the biathlon, and how they can somehow hit a target with a rifle after exhausting cross-country skiing.

After I took pictures for a while, the bear slowly got up meandered to east another bromeliad. Along with the bear’s stomach, my memory card was also filling up. The bear beamed at me through the viewfinder, and I beamed behind the camera. These are the moments I enjoy so much about photography.

And since we’re a website about photography, which also means photography gear, I can imagine you’re expecting some more in-depth impressions of my field experiences with the 400mm f/4.5 and 400mm f/2.8 lenses. Your expectations will not go unfulfilled. I’m already working on articles covering both lenses, so keep an eye out on the Photography Life homepage.