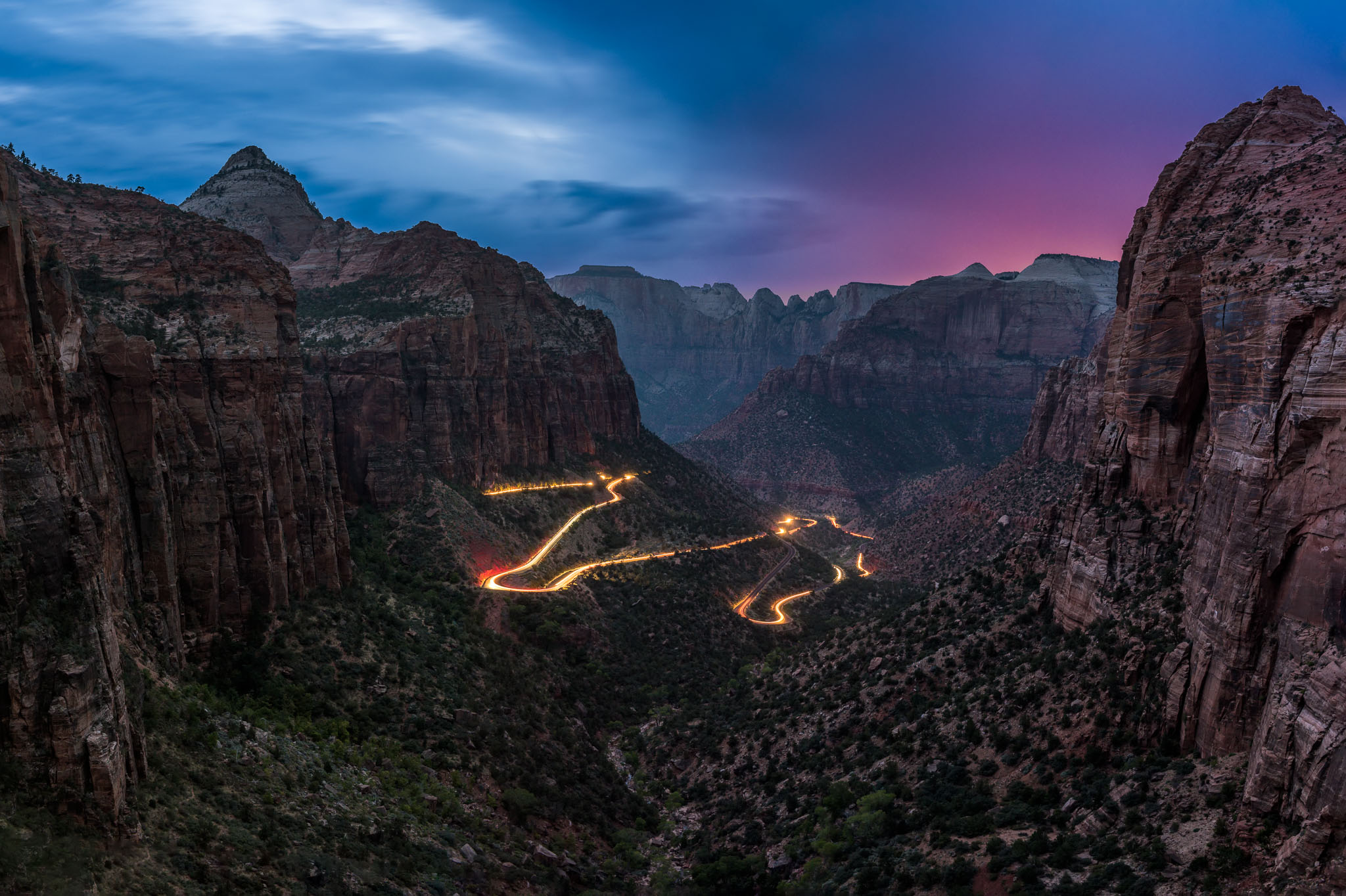 While I don’t have a definitive camera bag setup, I’ve got a number of must-haves, as well as a few typical setups, depending on what I’m shooting that day. Want to see some of my favorite gear for landscape and commercial photography? Here it is!

My landscape gear is definitely the most variable set of kit. What I bring for a short walk through the woods is going to be very different from an astrophotography shoot in the backcountry. Unifying all of the gear, however, is my Nikon Z7. While I previously shot with the Nikon D800 and D810 – which I loved for the significant resolution they offered – it got to the point where mirrorless just offered too many benefits.

All of my setups are based around the Nikon Z7, which has a Smallrig L-Bracket almost permanently attached. I like the extra bit of grip the L-Bracket adds, along with the fact that it’s compatible with all my tripods and other mounting solutions.

For memory cards, I’ve gotten to the point where I just leave a single large card in the camera, like Delkin’s CFExpress 256GB card. While I’ll bring some spare cards on longer trips, I find that I don’t fill a single card unless I’m on an especially long trip – and even then, transferring the card back at the hotel is perfectly fine to me. This approach, while slightly more vulnerable to card failure compared to multi-card setups, reduces the risk of losing a card, as well as simplifying file management.

One of the other benefits of mirrorless comes into play here: Nikon’s Z lenses. While many of Nikon’s F mount lenses were very capable, almost all of the Z-mount lenses are clear improvements over their F mount counterparts.

Particularly for landscape and travel photography, my most commonly used lens is the Z 24-70mm f/4. Sharp enough for a 45MP body, yet incredibly compact, this lens is almost always in my bag. I only swap it for the f/2.8 version for events and weddings.

Alongside the 24-70 f/4, I’ll add the 14-30m f/4 much of the time. It shares the 24-70mm f/4’s lightweight design, good sharpness, and low levels of optical aberrations. This makes it an easy choice for most wide angle scenarios. While I’d like to upgrade to the 14-24 f/2.8, the price is a steep jump for benefits that don’t matter to me outside of astrophotography.

Aside from using f/4 for astrophotography, my biggest quibble with the 14-30mm is the drastic change in the center of gravity when zooming the lens, as this makes balancing the setup on a video gimbal a bit annoying. Because of those two factors, I’m looking at adding a fast prime, like Venus Optic’s 15mm f/2, to my kit.

Those two lenses constitute my most basic landscape kit. Anything else, I add as needed. For telephoto situations, I would have loved a lightweight Z telephoto, like a Z 70-200mm f/4 or 70-300mm f/5.6. But instead of releasing one, Nikon prioritized five primes in the 40-60mm range. So, I’ve stuck with my 70-300 AF-P, which requires adding the FTZ adapter too. Maybe I’ll get the new Tamron 70-300mm at some point as a replacement.

For macro situations, I’ve added the Z MC 105mm f/2.8, which can also serve as a short tele in situations where I didn’t bring my 70-300mm AF-P. Because I typically shoot macro as a side goal to my main shoot, I don’t bring much macro supporting equipment.

Lastly, for dedicated astrophotography shoots, I like to bring the Nikon F-Mount 24mm f/1.8. This lens represents another area where I’d love to switch to the Z 20mm f/1.8 or 24mm f/1.8, but the cost of a new lens just isn’t worth it for a small jump in performance on a subject I shoot less frequently.

To pack everything up, I like to use the Backlight 18L, which offers a good balance of size and storage, particularly for mirrorless options. Interestingly, despite the listed specs, it can accommodate a 14″ MacBook Pro, although it’s a tight squeeze. This setup can look a bit conspicuous in urban environments, however, so I also make use of a now-discontinued ThinkTank backpack. The closest relative to that bag looks to be the Airport Essentials bag, which offers a very quiet, all-black design.

On my commercial shoots, the subject dictates the setup. A lot of the gear is the same as the landscape kit, but I’ll often bring more lighting, video, and drone gear.

For lighting, I’ve got a portable setup built around Godox’s lights and wireless triggers. I’m a big fan of the inter-compatibility of the system, as well as the really strong price-to-performance ratio. My typical lights are the AD200 strobes, which can light a room for “flambient” (flash/ambient) real estate shots, but also be used up close through a modifier for product photos. The small size of the AD200 also means I can get away with compact light stands, keeping the overall kit portable.

When it’s time to shoot video, I’m often still just using my Nikon Z7. For stabilization during walkthrough videos, I’ve previously been using a Ronin SC gimbal, although I recently started using a Zhiyun Weebill 3. For either of these gimbals, I like that they’re able to support my Z7 setup, without being really bulky and cumbersome. For the videos that I produce for clients, audio is often not a priority, so I’ll avoid adding a mic to my gimbal setup. On my videos for YouTube, however, I’ve gotten great results from both the Rode VideoMic Go and the Sennheiser MKE 600, which offers even more quality than the Go, but at a bigger size.

Lastly, my drone kit is a self-contained bag with a Mavic 3, controller, spare batteries, a few filters, and a light for night photography. By keeping everything together, it’s easy to bring my drone on a shoot, or just grab it to go out and fly for personal projects.

Over the years, I have picked up a number of things in my bag that aren’t strictly camera gear, but can really come in handy. Among these are some tools, like a Leatherman multi-tool (make sure not to try and fly with this, however) and a dedicated photo multi-tool, which offers a range of dedicated bits for camera gear like tripods and mounting screws. I’ve used my Leatherman for everything from pulling cactus out of my hand to tightening loose screws and cutting errant threads on a camera strap.

Also, I’ve always made sure to carry some business cards for impromptu networking. A microfiber towel for drying off gear after rain can also be used just to wrap around gear that needs some extra cushioning. Lastly, throwing a spare battery and a memory card into the bag, even if these are older or smaller capacity, can save a shoot if you forget to take your good battery or card with you.

Overall, I’ve been pretty happy with my setup. I’ve seen photographers who are more meticulous with packing things away, but prefer to be flexible. What I photograph can change drastically from day to day, and I like my gear setup to reflect that. I really prize being able to slim my kit down when possible, so some of my most basic setups are just a body and a lens or two.

Let me know in the comments if you have any questions or are looking for any recommendations!