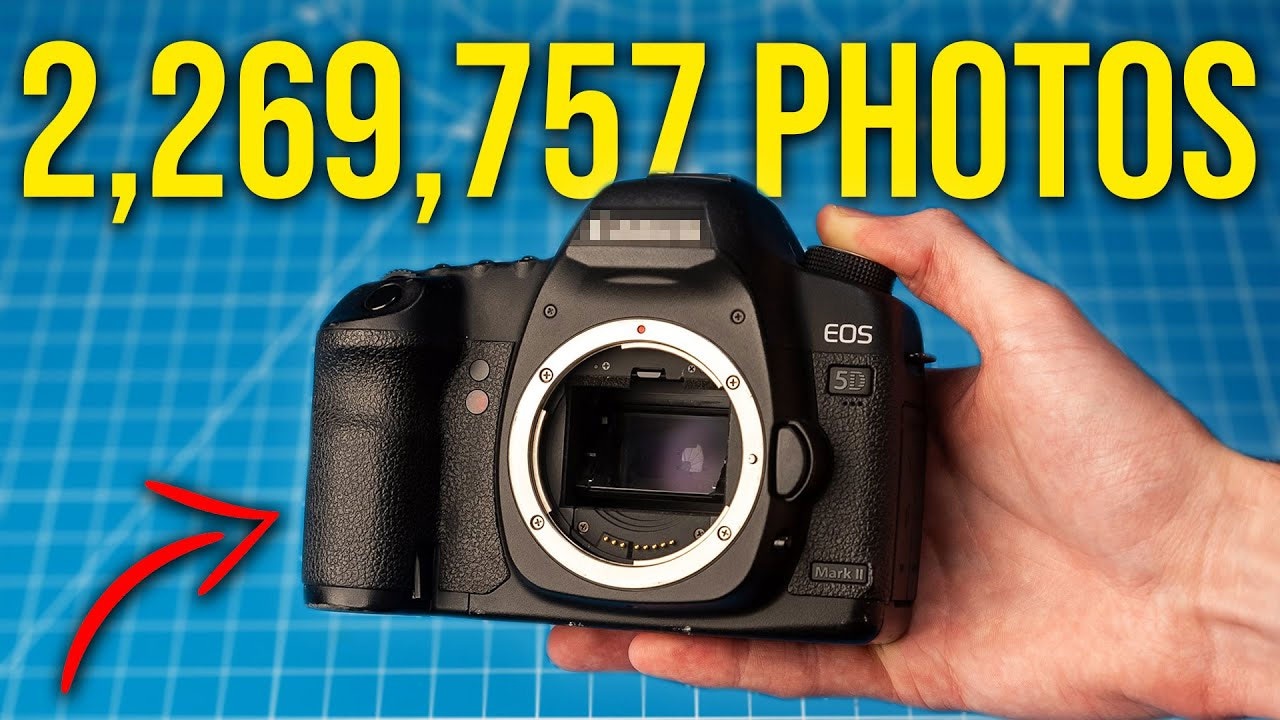 On the used camera market, the question you always see is “How many actuations does it have?” It’s a perfectly reasonable question to ask. It’s no more weird than wanting to know how many miles the used car you’re about to buy has done. The more it’s done and the more it’s been used, the less life there’s likely to be left in it, right?

While some manufacturers don’t post the numbers publicly, pretty much all cameras come with some kind of expected shutter life count. These days, that number hovers somewhere between 100K and about 300K depending on the level of camera you buy. The Canon 5D Mark II was rated to 150K when it was released back in 2008. But this one, acquired by YouTuber FoxTailWhipz has over 2.2 million actuations and is still going strong.

The 5D Mark II was a turning point for DSLRs. Although it wasn’t the first DSLR to be able to shoot video (that honour goes to the Nikon D90), it was the first one that made any kind of serious impact – largely thanks to Vincent Laforet producing Reverie and explaining to Canon exactly what they’d done. It even went on to shoot episodes for TV shows like House.

But it was also an extremely popular camera for stills, too. So popular in fact that this particular example has shot 2,269,757 photos. Or at least, that’s the number it was on when FoxTailWhipz (aka Adam Harig – Yup, the guy who bought all those broken Arri cameras) spotted it on the website of used camera retailer MPB. Now it’s a bit higher because he’s fired a few more shots off himself with it.

The camera was listed on MPB for a mere $200. Even today, that’s a bargain for a full-frame DSLR like the Canon 5D Mark II. So, he couldn’t resist buying it to see if it really had done that many shots and to see what kind of condition it was in. You can see from the video that it looks to be in great shape with just a few scratches around the body. Despite the extremely high shutter count, it seemed relatively lightly used.

He guesses that it was possibly used by a sports or wildlife photographer, but personally, I don’t think so. For normal photography, even those folks who shoot 4,000 photos at every wedding, I can’t imagine many of them would get up to these kinds of numbers on a single body. Even if they were shooting that much, they’d have upgraded to newer bodies simply because the tech has become so much better, even if the camera hadn’t died.

I’ve got two Nikon D100 bodies here that I purchased in 2002. They had an estimated shutter life of 80,000 actuations and both of those are now well over a million actuations each and still work. In my case, the reason was timelapse, and I suspect that’s the culprit with Adam’s 5D Mark II. If you’re shooting for a 4-minute timelapse, that’s 240 seconds of footage, at 24-30 frames per second. That’s between 5,760 and 7,200 frames for the finished video.

When you consider that probably half of the clips shot don’t even make it into the final video and that many of the clips will be far longer than needed for the final edit then yeah, you can easily shoot 20-30K shots on a day out shooting timelapse. And if you were doing it every single day, you could burn through those 2.2 million actuations in less than three or four months.

Timelapse might also explain how it’s managed to survive to the number that it has, too. We featured a video from Matthew Vandeputte a couple of years ago talking specifically about this topic. His cameras are far exceeding the estimated lifespans published by Canon and he puts forward some explanation as to why cameras that shoot timelapse might see an extended shutter life over just using it to shoot photos the regular way.

Regardless of how Adam’s new acquisition hit its numbers, the only remaining question is how long it will keep on shooting. It would be interesting to see if he puts it to use as a timelapse camera himself, just to see how high he can get that shutter count!

What’s the highest shutter count on your cameras?