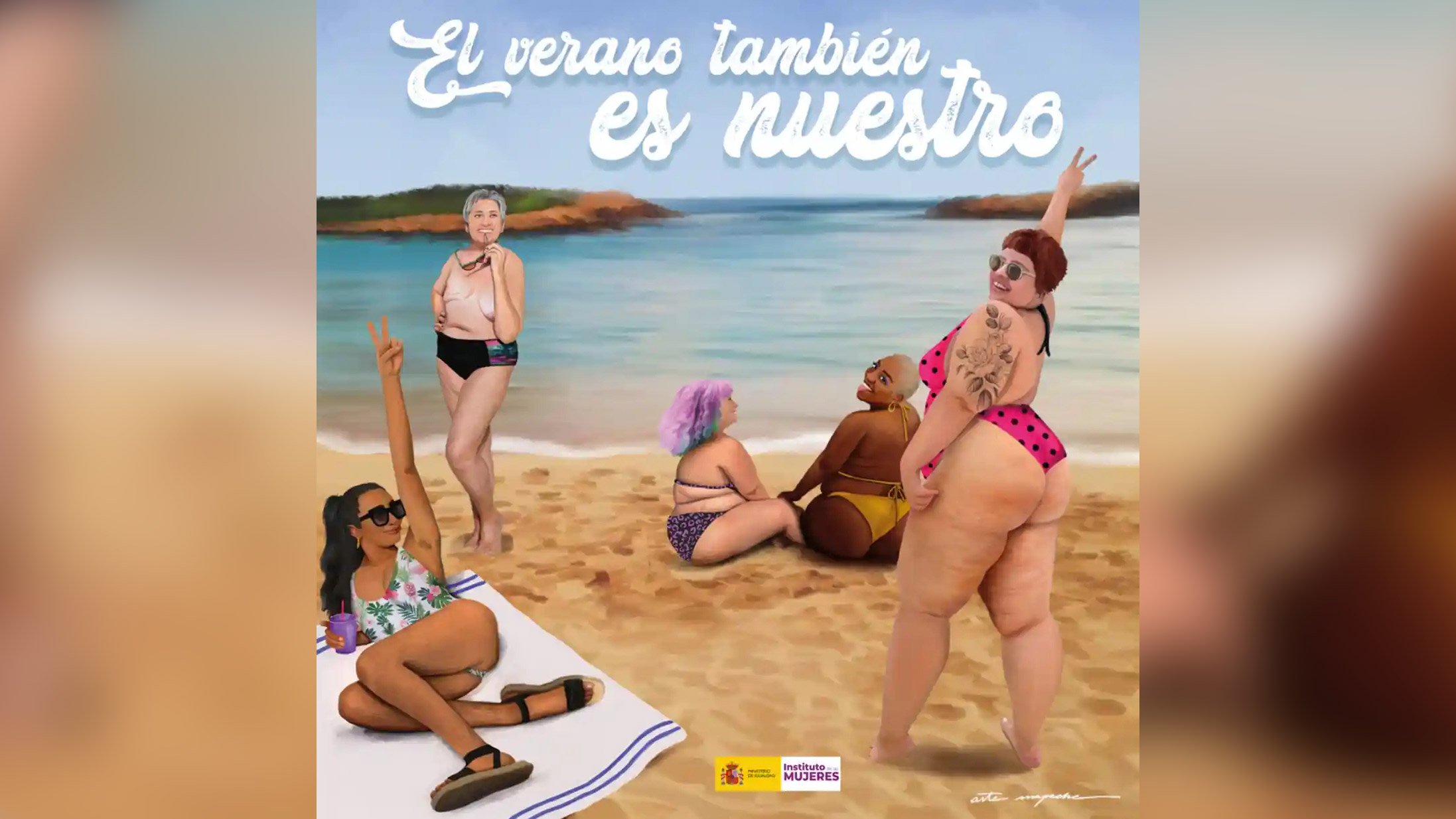 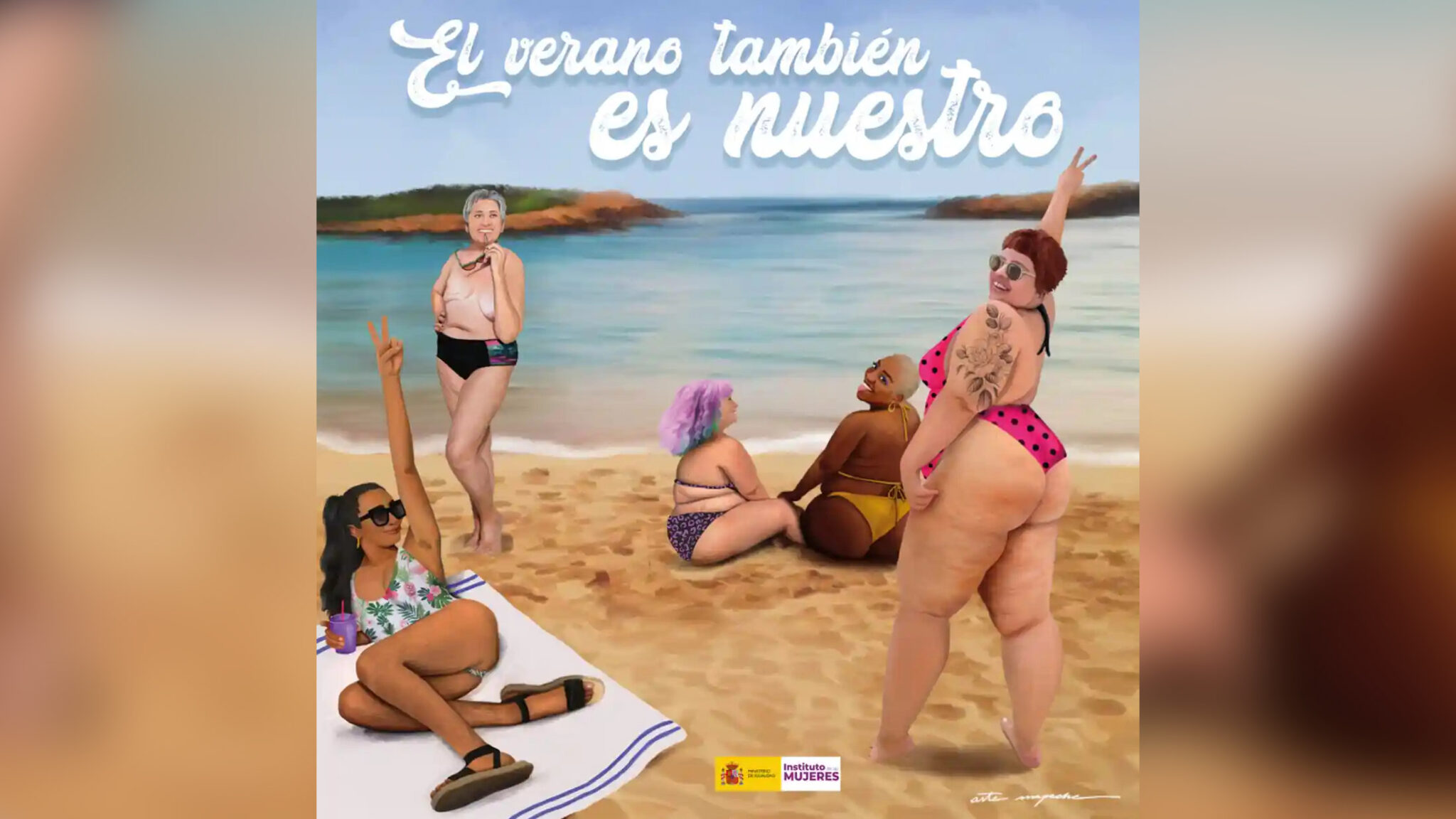 Three British women have made complaints so far when they spotted images of themselves used without their permission in a Spanish government campaign. The advertisement was commissioned by the Spanish Women’s Institute as part of their Equality Ministery.

The poster translates roughly as “Summer is our’s too”, and shows five women of different body shapes and sizes enjoying a day at the beach. The image was put together by artist Arte Machape, however, it appears that neither Machape nor the Spanish Government bothered to request permission to use the images of the women. And in an even stranger twist, the Spanish ministry has said that it didn’t know that they were “real people”.

The first woman to realise that her images were being used without permission was model Nyome Nicholas-Williams, from London. Nicholas-Williams is featured seated in a gold bikini in the ad. However, the photo was taken directly from her social media feed and then the colour changed on the bikini.

After making a complaint Nyome was contacted by Machape who said that “they used my image because they were running low on time,” Nyome told the BBC News. But she’s not buying that. In an Instagram post, she sums it up by asking “do I not deserve to be even asked whether my likeness can be used for a Spanish government campaign? Do I not deserve to be paid for the usage of said image? Y’all are just downright disrespectful at this point.”

Then second model Sian Green-Lord noticed that her image had been used. Even more bizarre is the fact that Green-Lord’s prosthetic leg was photoshopped out of the ad image and replaced with somebody else’s. Green-Lord says in an Instagram story that she was left “shaking with rage” after she saw her photos had been edited to remove her prosthetic leg.

“There’s one thing using my image without my permission. But there’s another thing editing my body,” Green-Lord adds, “”I literally don’t even know what to say but it’s beyond wrong.”

And then there’s the third woman who has just stepped forward. Breast cancer survivor Juliet Fitzpatrick noticed that her face had been photoshopped onto another woman’s body. Fitzpatrick (well her face anyway) can be seen standing to the left of the image. The body in the image has had a single mastectomy, Fitzpatrick has had a double mastectomy so she knew immediately that it wasn’t her body.

In a statement to the Guardian Fitzpatrick says that “the thought of my face being on a body of a woman with one breast is quite upsetting.”

Fitzpatrick added that she had worked on a Dove campaign with Getty Images, which was specifically against digital distortion of images. “This person hasn’t learned anything from that at all,” she says, “I think it totally invalidates the whole campaign.”

The Women’s Institute reached out to the three women in an email, apparently apologising for the unauthorised use of their images. The email said: “We did not know that images of real women had been used. We sincerely apologise for any damages that may have been caused to you. The aim of our campaign is to recognise body diversity in all its dimensions, and we will be glad to collaborate with you in any related action.”

Machape apologised last week to the women and offered to split the paltry €4400 she earned from the work with the models. It has also transpired that the typeface she used wasn’t copyright free and was not authorised for commercial use. Further leaks online have also asked where the other €80,000 went. The total cost of the ad campaign was €85,000. A considerable sum when real models weren’t being used or paid for.

Living in Spain, I’d love to say that this is a genuinely unusual mix-up. However, the cynical side of me has to say that someone knew exactly what they were doing and was probably just hoping that they would get away with it. I wouldn’t like to say who, however, the blame falls equally both on the artist and on the Government Institute that commissioned and published it. It is fair to surmise that in this day and age, they knew that they were firmly breaking European Copyright law. To then further insult the women by chopping up and distorting their bodies further just add further insult to injury.

The other completely strange part of this is that Spain feels it needs a beach equality campaign at all. If you visit the beach in Valencia you will literally see all body types enjoying the sunshine in all states of dress; bikinis, mankinis, thongs, topless…it quite literally all hangs out, whether you like it or not. It’s actually the foreign tourists who are the most inhibited here if anyone is.

Nyome finds it “very ironic and wild” that the Women’s Institute used their images without their consent. It pretty much negates the entire point of the campaign, particularly when several of these women are already involved in body positivity movements. The models have since responded that they would be more than happy to re-shoot the campaign, in-person, in Spain, and paid of course.

Win a free Airdrop
How to Use a Light Meter in Photography
The Pentax K-3 III Jet Black Special Edition is Now Available in the U.S.
How to Use the Spot Removal Tool | In A Lightroom Minute
The Two People in Every Photo, According to Ansel Adams