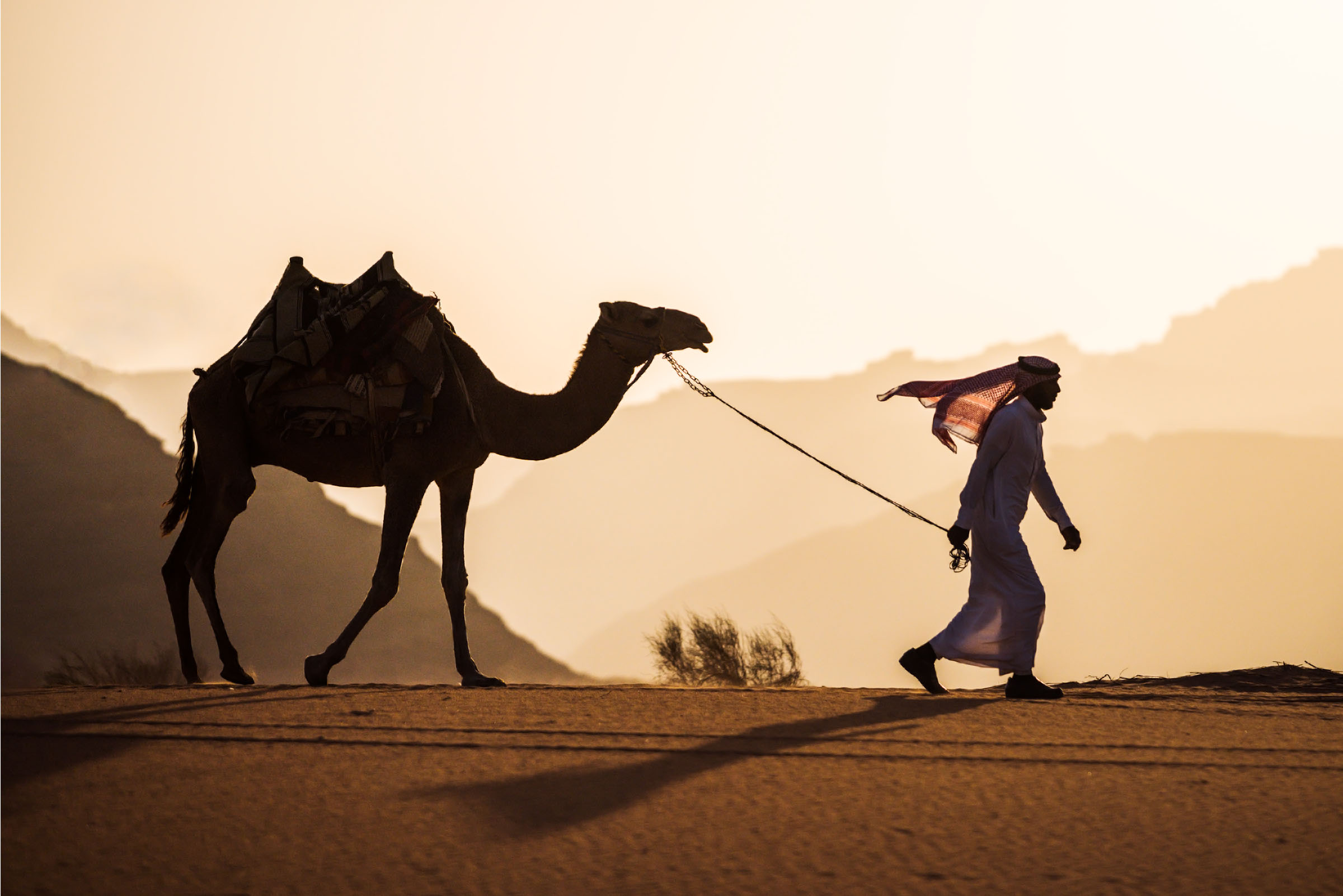 As I was updating some old articles on Photography Life, I came across what I believe to be the most popular comment anywhere on the site. It concerns a particular lens that Nikon Z users have been asking about for a while now. I’ll let the comment speak for itself: 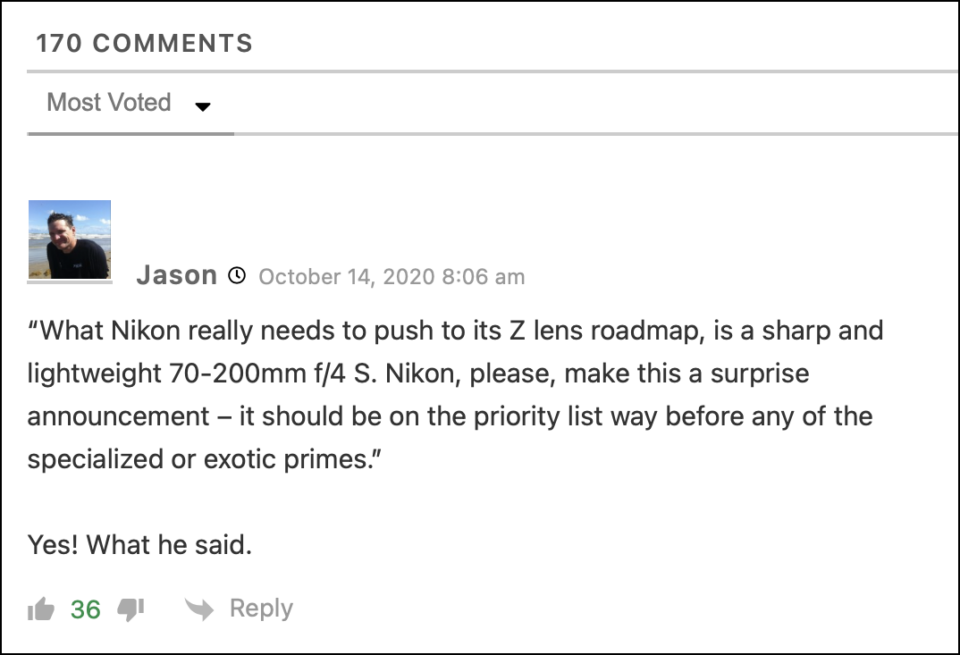 A reader of ours named Jason posted this on our Nikon Z Lens Roadmap article. He quotes the article as saying:

What Nikon really needs to push to its Z lens roadmap, is a sharp and lightweight 70-200mm f/4 S. Nikon, please, make this a surprise announcement – it should be on the priority list way before any of the specialized or exotic primes.”

We’re not the sort of website that attracts hundreds of likes for popular comments, so perhaps 36 upvotes seems like small potatoes compared to the numbers on sites like Dpreview and Nikon Rumors. But to the best of my knowledge, there’s not another comment on Photography Life which has compelled more people to give the thumbs up.

Jason’s comment isn’t a fluke, either. It seems like more than half the requests on that article were asking for a lens like this. The following image is a screenshot – not a composite – of the most popular comments on the page from top to bottom: 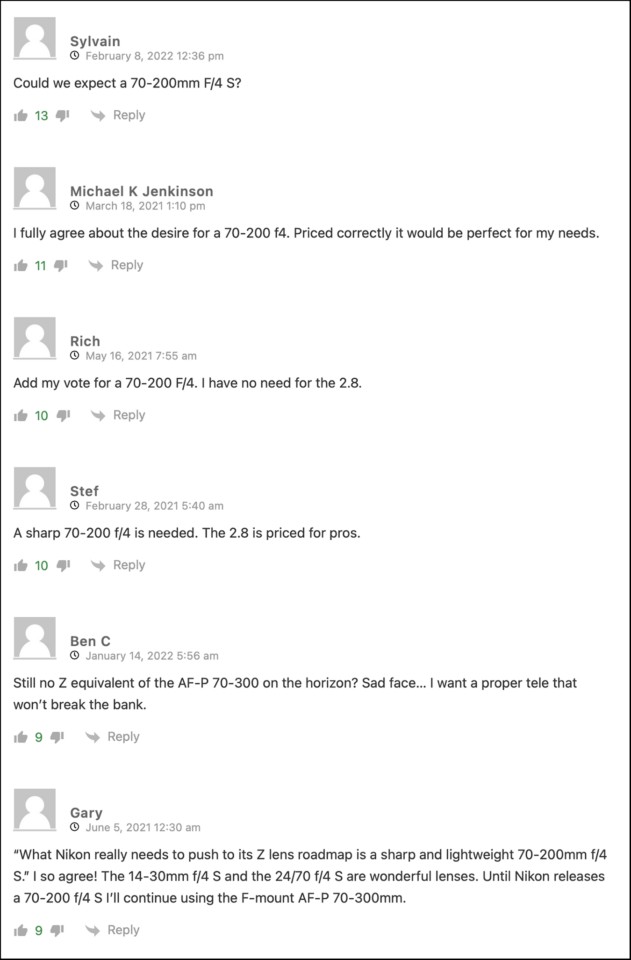 At this point, Nikon is the only camera company not to have a 70-200mm f/4 for their full-frame mirrorless system. Canon has one, Sony has one, and even Panasonic has one. Those brands also have a sprinkling of 70-300mm f/4.5-5.6 lenses and similar, while Nikon does not. Since Nikon’s roadmap doesn’t show anything, either, it may still be years until one is announced (I dread to say it, and I think it’s unlikely, but: if ever.)

Something similar can be said of a 70-300mm f/4-6.3. As a variable aperture zoom, these are usually lower-end lenses and may not have the build quality of a constant f/4 lens. But they’re light and inexpensive, and they can reach 300mm, so they’re useful lenses in their own right. Nikon has sold tons over the years for their F-mount system.

Another alternative is to adapt lenses. Nikon’s F-mount AF-P 70-300mm f/4.5-5.6 VR is the most common adapted lens that I’ve seen among our workshop participants and readers, maybe because it’s still lightweight even with an FTZ adapter permanently affixed to the back.

But something more is needed. I don’t think I’m crazy to believe that a lightweight camera system like Nikon Z should have access to at least one dedicated lightweight telephoto. (By “dedicated,” I mean not an adapted lens, and not a superzoom.) I even believe that Nikon knows this, seeing as though one of the first DX lenses they ever released for mirrorless was the Z DX 50-250mm f/4.5-6.3. Yet there is no full-frame equivalent.

I don’t intend for this article to be an anti-Nikon tirade. Actually, I’ve been impressed at how well Nikon has fleshed out the Z system in less than four years, especially in the middle of a pandemic and supply-chain crisis. I’m not switching brands any time soon, and I even bought the 24-200mm f/4-6.3 to fill this gap for my own photography, since I don’t need a constant f/4 aperture for most of what I shoot. (Maybe that’s what Nikon wants us all to do in the end anyway.)

There’s also the practical reality of bringing a new lens to market in the first place. How many copies will it sell? How much will it cost to produce? I can’t answer those questions about a 70-200mm f/4, and internet comments and upvotes certainly don’t always translate to sales. Nikon doubtless has much smarter people working on their product lineup decisions than me. Maybe they’ve discovered a lens like this would be a bad manufacturing investment.

But I still think the time is right to at least put something on the roadmap. They already have four lightweight midrange zooms: the 24-50mm f/4-6.3, 24-70mm f/4, 24-120mm f/4, and 24-200mm f/4-6.3. Plus a cheap f/2.8 zoom in the same range (as well as an expensive one). If the market of lightweight and budget photographers is big enough to support all that, a single telephoto meant for the same audience doesn’t seem like a stretch to me.

We’re almost in announcement season for Nikon and should be seeing more news on a Z6 III and their aps-c plans before long. If we’re lucky, a lightweight telephoto for the full-frame system could be squeezed into the releases. And then the most glaring hole in the Z lens lineup – one that’s been garnering popular requests on at least one photography website since October 2020 🙂 – will be closed.