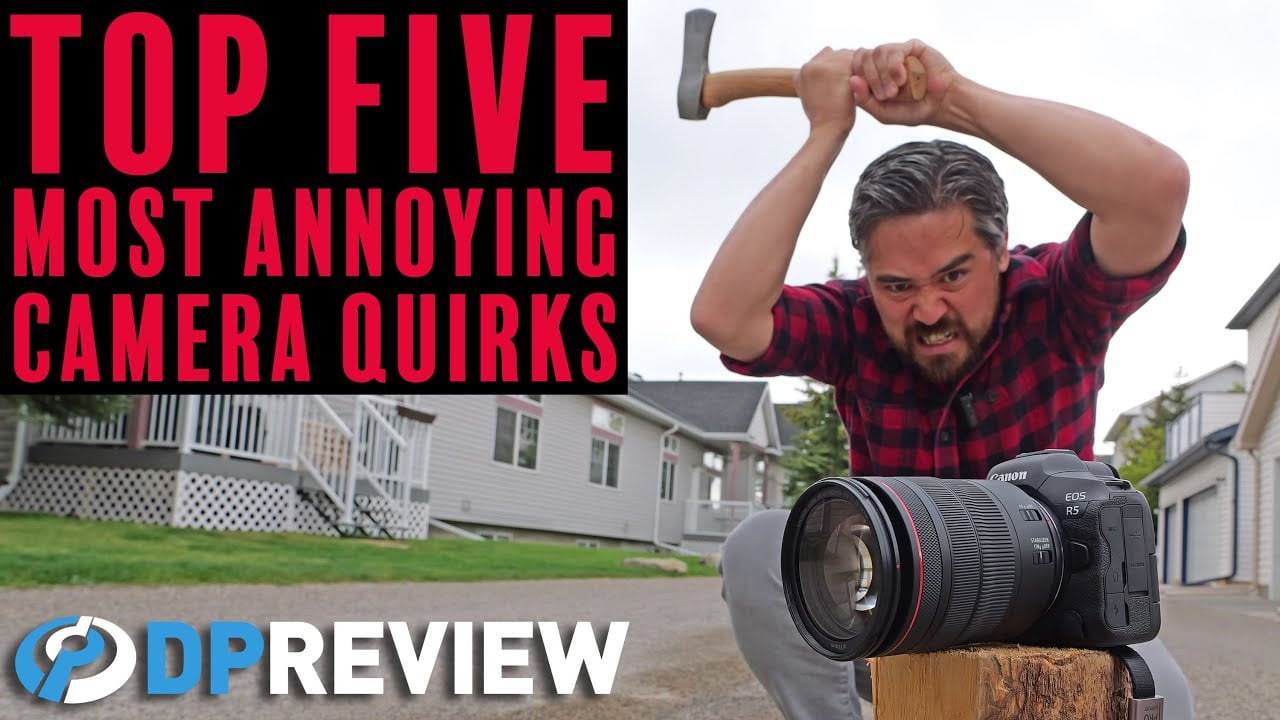 If there’s one thing that photographers can do well regardless of their skill level, it’s complain! And there are few who complain about cameras quite as well as Chris and Jordan at DPReview TV. In this video, they talk about what they believe the five most annoying quirks on cameras today. Although they don’t limit their quirks to a particular model or even brand of camera, it does show that no brand is really perfect.

I’m sure all of us could come up with a healthy list of things that annoy us about our chosen camera or brand, though. I shoot Nikon for stills and Panasonic for video, and I’ve definitely got some complaints. I might mention a few of them later. For now, though, here’s Chris and Jordan’s list.

I have to be honest, the lack of in-camera raw processing isn’t really an issue for me. My Nikons have had the ability to do basic edits to images in-camera for years and I can’t recall ever using it. Not even once. Chris and Jordan are in a unique situation with that one, though, as they point out in the video. They often get cameras way ahead of release time before there’s any support for them in Lightroom, Photoshop or Capture One. And if there’s no in-camera processing of the raw files to spit out a jpg with a few editing tweaks then they’re pretty much stuck with the regular in-camera jpg at the time of shooting. For the rest of us though… Have you ever used in-camera raw processing?

The GH6 issue that they mention isn’t an issue for me, either, because I don’t have a GH6. But I do have a GH5, three G80s and two GX80s (that’s the G85 and GX85 for Americans) and I have one big issue with them that prevents me from really using any of them for stills and that’s the lack of continuous shooting flash support. My Panasonic GH5 can shoot up to 12fps but if I’ve got my Godox XPro-O trigger for Panasonic in the hotshoe, the flash fires on the first shot when I jam my finger down on the button and then it just sits there shooting no more images.

Interestingly, if I put the Godox XPro-N for Nikon in there, which has no communication with Panasonic except for the centre “trigger” pin, it’ll shoot continuously at full speed and the flash will fire every time. Of course, I get no HSS with the Nikon trigger. Same deal with the G80 and GX80. Panasonic’s newer cameras are no different. If you want continuous shooting with HSS, you have to buy a Panasonic flash. They force you to buy their overpriced and underpowered speedlight in order to get those features you only need when not using an on-camera flash – like continuous shooting with HSS!]

Note: I did warn you photographers like to complain!

As far as Nikon goes, my biggest complaint with them for years was their video capabilities. Nikon’s DSLRs… Well, they suck pretty hardcore for video – despite being the first company to produce a DSLR that could actually shoot video – which is why I only use them for stills and I’m perfectly happy with them for that. They seem to have fixed a lot of those issues these days with mirrorless, but I’m yet to jump on the Z mount train. I’m not entirely sure I’m going to yet, either.

What do you shoot? and what’s your biggest complaint about it?

How To Edit Digital Images to Look Like They Were Shot on Film
How to Turbocharge Your Photography Workflow
Free, Open-Source Photo Manager DigiKam Gets a Big Update
Lucky Photographer Captures SpaceX Rocket Shooting Across Night Sky
This wooden lens was built using the guts of a Super-Takumar 55mm f/2 and it actually works