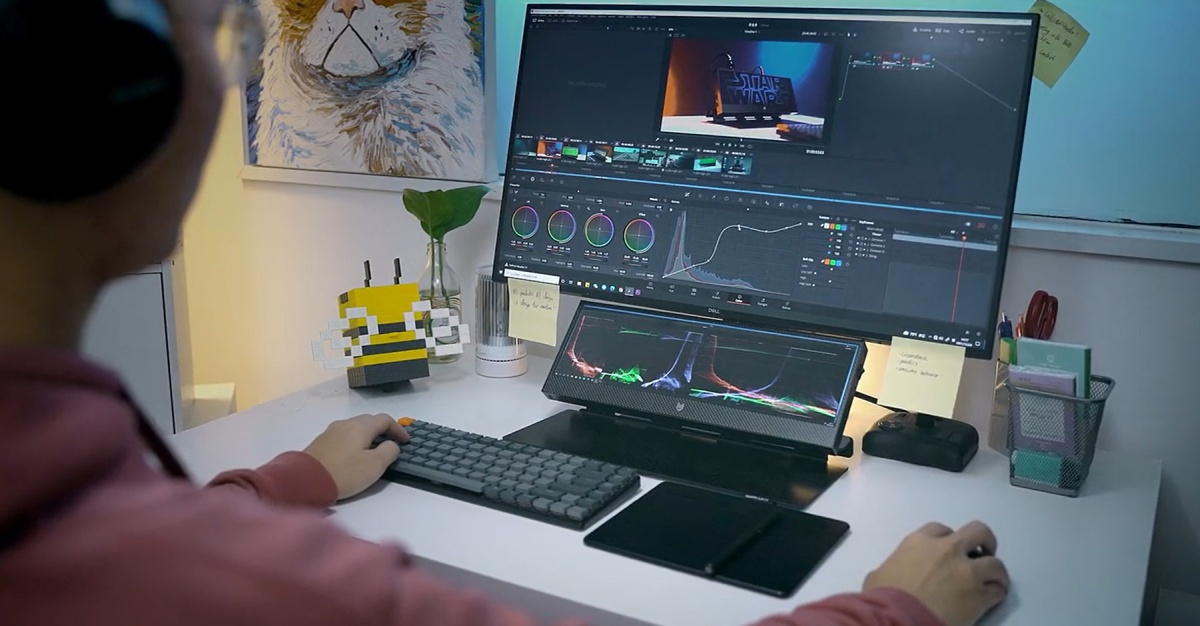 Well, this is pretty cool, if a little expensive. Lukos is an ultra-wide HDMI IPS display offering 100% sRGB and 3840×1100 resolution for a whopping 32:9 widescreen view, advertised as an “advanced monitor for entertainment and productivity”. The size and aspect ratio of it is very reminiscent of the “Duo” laptops from ASUS that kicked off with the ZenBook Pro Duo a couple of years ago.

And it looks like it should provide a similar level of functionality, too, acting as an extra super widescreen monitor onto which you can place all kinds of small apps to keep them handy but out of the way. Or, drag your Photoshop, Premiere Pro and After Effects panels on there to free up screen space on your main monitor.

Lukos launched on Kickstarter, although the campaign is now over. So you can’t get one there anymore. That’s not a big deal, though, because you can still pre-order one on Indiegogo for the *giggle* bargain price of only $419 (which isn’t much more than it was selling for on Kickstarter). And, yes, that’s a discounted pre-order price. 32% off. That makes the full retail price when it goes on general sale a somewhat nutty $619.

Yeah, I get it, it’s a cool new 4K 32:9 in a 14″ screen, but $619 is still pretty ridiculous for what it really is – especially when there are other options on the market for as little as $150-200 – depending on whether or not you want a touchscreen interface (which Lukos isn’t).

To its credit, though, Lukos does seem to have a lot more connectivity options than the cheap AliExpress alternatives. It features DisplayPort 1.2, a pair of DisplayPort 1.4, a pair of HDMI 2.0B and an HDMI 1.4 socket, as well as Type-C (presumably for DP Alt Mode) and they say you can connect up to four devices simultaneously, too.

At only 300 nits, it’s not super bright and it only has a refresh rate of 60Hz, so you’re not going to be doing any super fast 150fps gaming with this thing, but for general productivity for photography and video workflows, it could potentially be an extremely valuable asset – as has been proven by the aforementioned ASUS ZenBook Pro Duo.

It is very cool, and I could see something like this easily working its way into my setup here, sitting underneath one of my 27″ 4K displays  (each of which cost me less than Lukos demands) to keep my news feeds, calendar and other things out of the way but still easily accessible, not to mention being able to drag parts of Photoshop or other applications out of the way on my main display.

It’s a fantastic idea, and it was a fantastic idea when ASUS started to build what is essentially the same thing into their laptops, but at $619 retail or even the $419 discounted pre-order price. Hopefully, other companies will jump on these relatively soon and drive those prices down a bit. For now, I think I’d rather go the AliExpress route.

If you want one, though, or want to find out more information, head on over to Indiegogo. Shipping is expected to begin in May 2022.