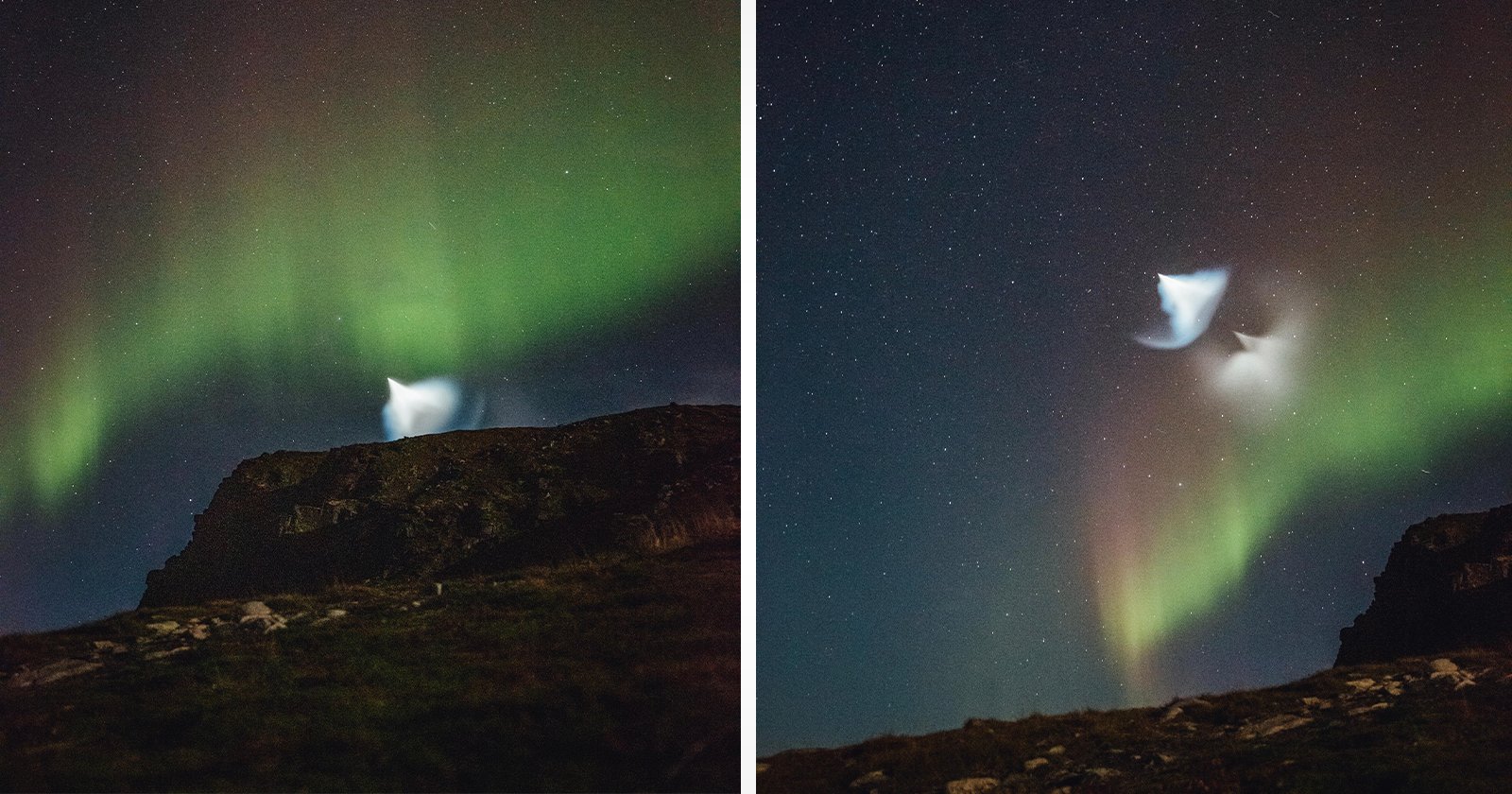 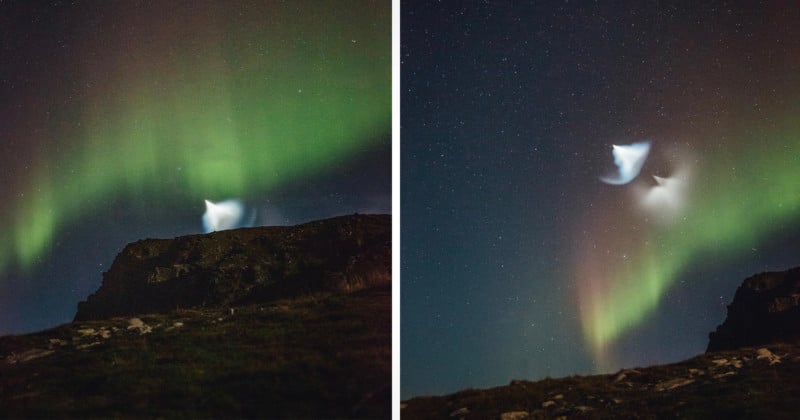 Photographer Florian Kuhnt was hiking with a friend in northern Norway in order to capture the northern lights. On his last night, he was about to pack up his camera when he noticed a bright light in the sky, what he would later realize was a NASA rocket.

Kuhnt, who studies aerospace engineering in Hamburg, Germany, and does landscape and outdoor photography part-time, tells PetaPixel that he was in the Lofoten region of Norway in order to specifically photograph the northern lights.

“The plan was to hike up Ryten to capture the sunset and northern lights over the Kvalvika beach, camp there for one night, hike down the next morning to the beach, and then back to the car,” he says. “Around 5.5 miles round trip.” 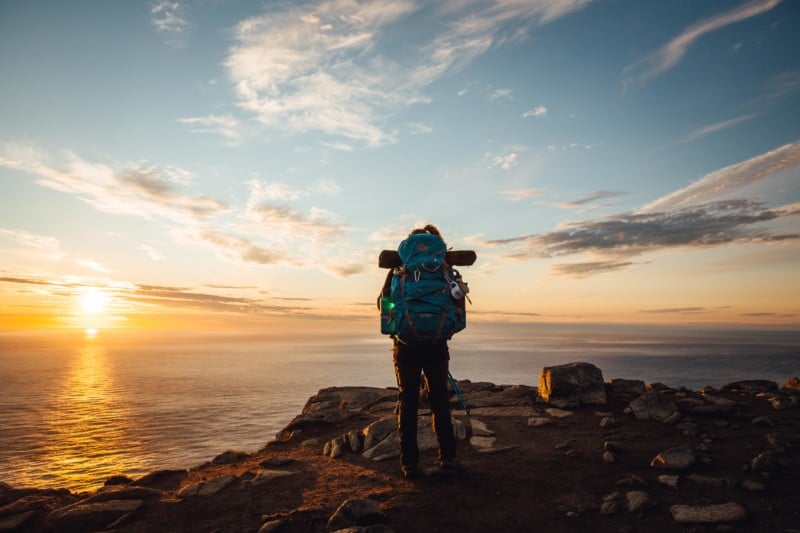 The two reached the summit in the early evening and started to take a few photos. They eventually came down a bit from the true summit because the high winds made it impossible to set up a tent.

“After setting up the tent we stayed outside in the cold to wait for northern lights. At that time I had already set up my camera and took a few pictures of our tent under the stars,” he continues. 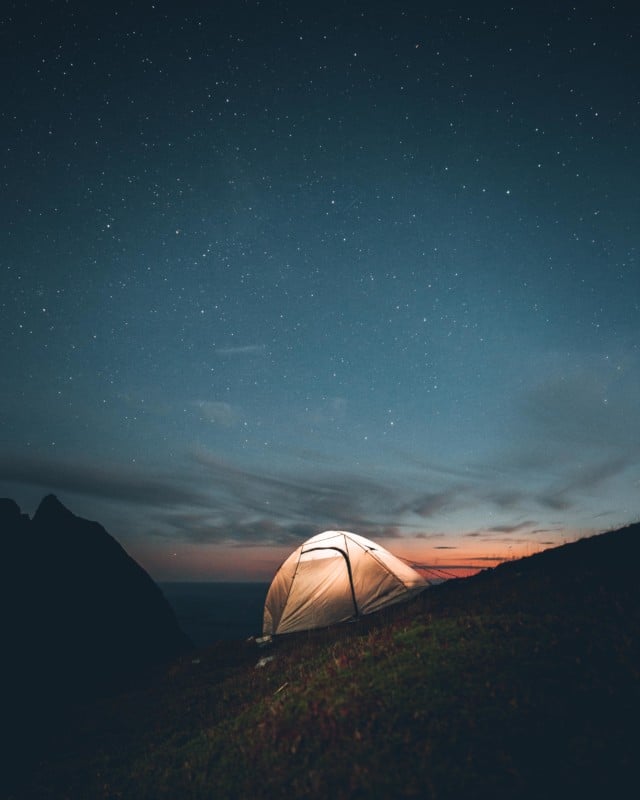 The northern lights are somewhat predictable, but their strength is affected by the time of year and even then varies from night to night.

“Almost two hours later, the first northern lights appeared but were really, really faint,” he says. “So I patiently waited for more while my friend went into the tent to prepare everything for the night.” 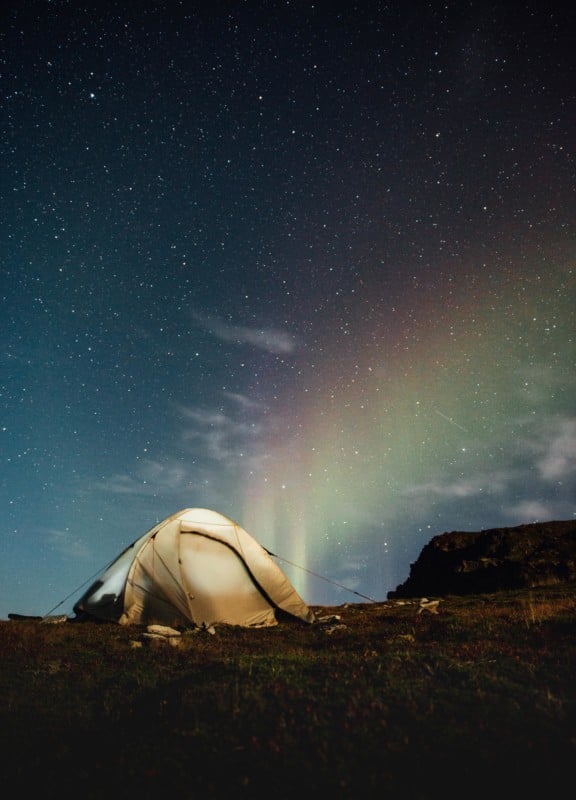 Kuhnt says that after another hour, he was fighting the cold and wasn’t seeing the strength of the northern lights increasing by much. Ready to call it for the night, he started to pack up his gear and get to sleep. But as he started to break down his camera and tripod, he saw something in the sky. 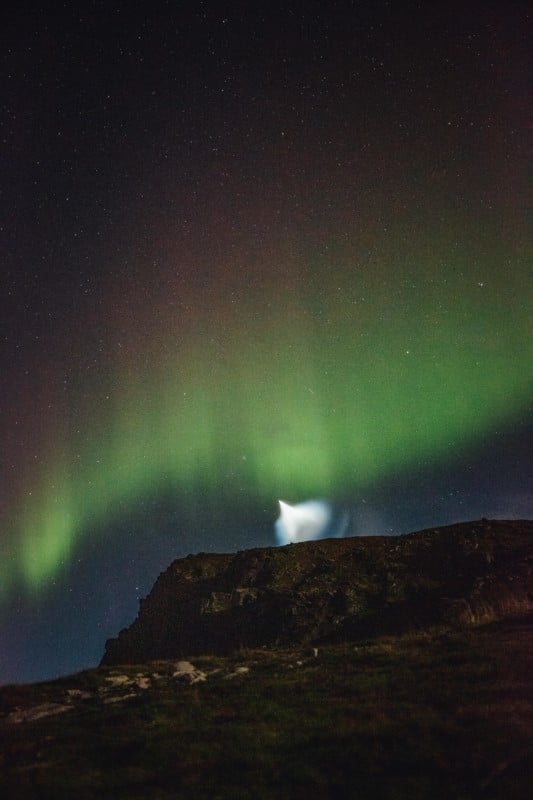 “I suddenly noticed two really bright, cloud-like objects moving in the sky,” he recalls. “They moved really fast across the sky coming from the south towards the north. The whole event lasted about five minutes and I was able to get a few shots. Due to the fast velocity, I had to increase the ISO up to 12,800 for a higher shutter speed to get a decent exposure without motion blur.” 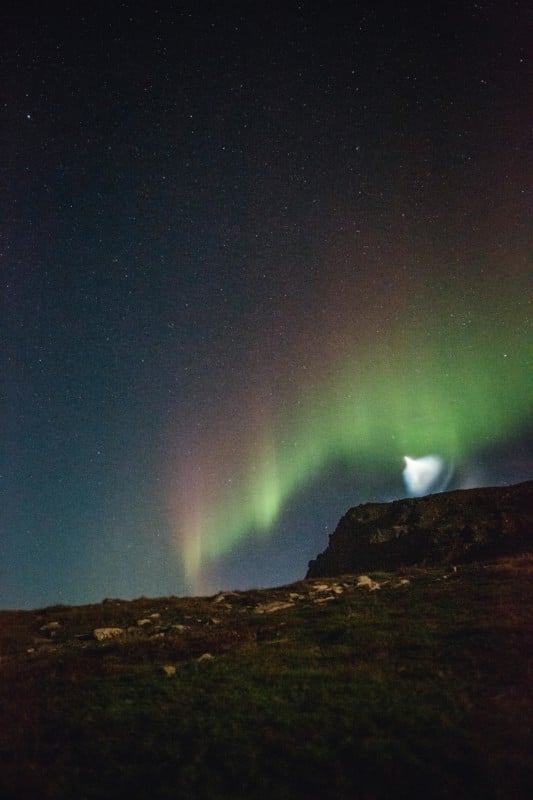 Kuhnt shot multiple photos of the event with his Canon 5D Mark III and Canon 24-70mm f/2.8 II lens. He says that he had never seen anything like it before and was, at first, not sure what he was looking at, but then remembered seeing photos of the SpaceX launch over Los Angeles. 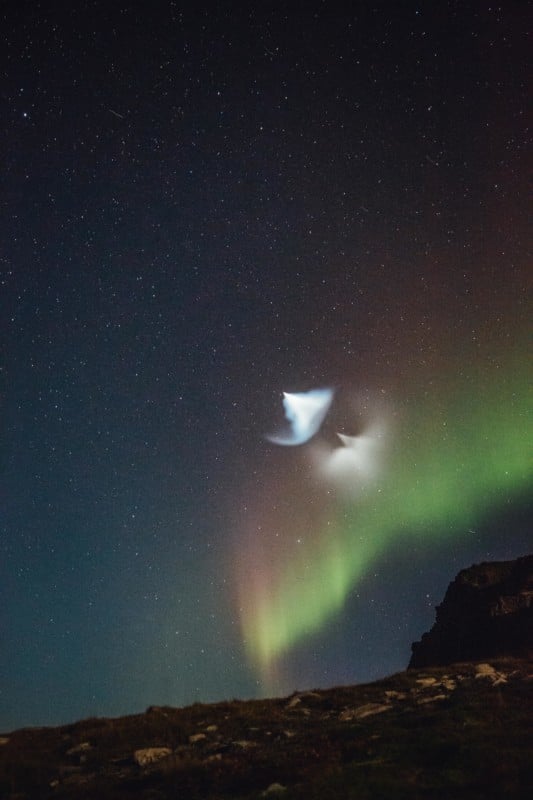 “I googled the latest rocket launches and saw that an Atlas V rocket just launched from the Vandenberg Space Force Base in California, carrying the Landsat 9 Satellite,” he says. “After a bit of research, I was sure that we just witnessed the deorbit burn of the Centaur Upper Stage and fuel blowout. Those both clouds got illuminated by the Sun which made them visible. The rocket itself is too small to see with the eye since it’s orbiting between somewhere about 550 to 680 kilometers in altitude. The launch alone would be really exciting to witness but that it flew right through the northern lights was just the icing on the cake.”

NASA’s Landsat 9 recently captured its first images of Earth as part of its mission to document the changes to the topography of the planet over a series of years. Kuhnt says that the path of the rocket went right over his location in Norway, which can be seen in the trajectory animation video below (around the 28-second mark):

Despite the incredible luck of seeing a rocket though the northern lights, Kuhnt says he had to abort their trip in the middle of the night because the wind increased and changed its direction.

“After the second tent pole broke we decided to call it a day (or night) and we descended two hours to the car at 3:00 AM. But overall it was a nice trip,” he says.

Image credits: Photos by Florian Kuhnt and published with permission.