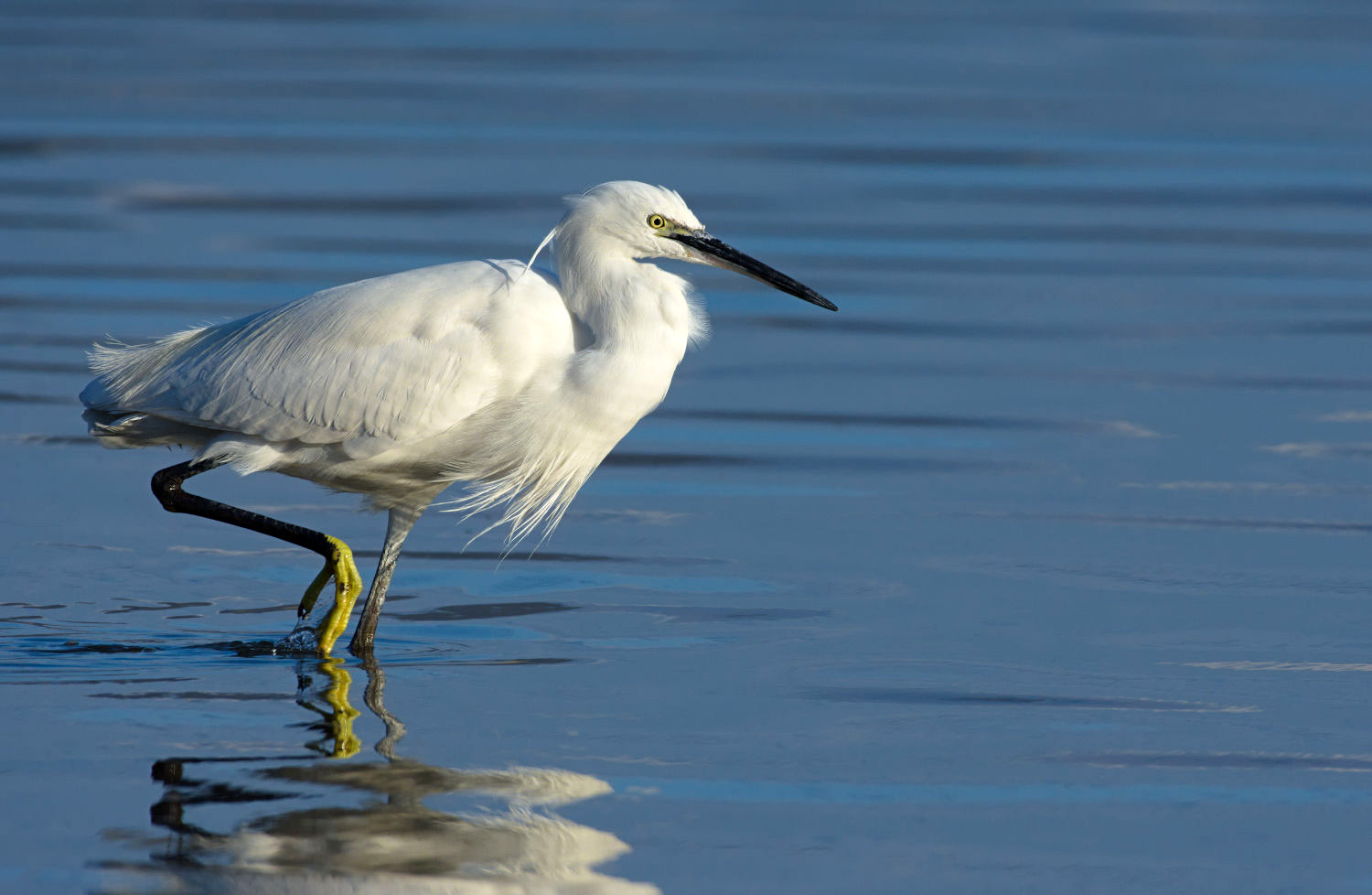 As an amateur bird photographer, I often asked myself what is so special in birds, and why many people are so attracted by them. The answers to these questions are not unique and likely involve subjective feelings and personal motivations. Some are simply attracted by the fact that birds are challenging and fascinating subjects. Others may enjoy spending some time outdoors in close contact with nature, regardless of the possibility of getting any shot at all. Still, others may think of birds as excellent subjects due to their behavior and plumage color.

Plumage color is one of the most attractive attribute of birds. No surprise then, if colorful birds, such as the kingfisher and the bee eater, are among the most wanted and celebrated. However, this does not mean that monochromatic subjects do not trigger imagination and interest. Conversely, they give us the opportunity to emphasize tiny plumage details, or play with the contrast between the subject and the background. The chance of getting good shots likely increases for geographically well-distributed species, especially those that can be quite closely approached without too much effort.

One such species is the Little Egret (Egretta Garzetta), the smallest member of the herons in Ardeidae family. This aquatic bird is not difficult to recognize. A white milky plumage covers most of its body. The black tiny legs markedly contrast with the yellow feet. The pale yellow eyes partially surrounded by a greenish-gray skin patch, which helps not confusing this species with others, like the snowy egret.

Little egrets are migrating birds, and move to and from their breeding locations, mostly depending on the climate. In northern Italy where I live, egrets may eventually be found in winter, likely due to milder conditions than in the past. This is one of the reasons why, over the years, this bird has become one of my favorite subjects.

The aim of this article is to give PL readers some useful suggestions, in the hope these tips would help those approaching this subject for the first time. Meanwhile, long before this article, tributes to the beauty of egrets and herons already appeared in PL in many articles and reviews (see Nikon D3s review, Nikon 600mm f/4E FL ED VR review and Elizabeth’s excellent bird photography tips and tricks article).

Rivers, ponds, lakes are the places where you will likely find egrets, either alone or in small groups. These birds mostly hunt fishes and insects, but do not disregard reptiles or small mammals. Egrets often wader in shallow water while feeding. Riverbanks and mudflats are thus ideal places where to start taking pictures.

Like all herons, egrets are ware of humans. In my own experience, however, egrets appear to be much more tolerant to humans than herons. Nonetheless, closely approaching these birds requires some care and good camouflage.

When properly blended into the surrounding environment, a blind is probably the best solution, and offers the best concealment. For egrets and not-too-skittish birds, however, I prefer to sit on a small chair, covering the tripod, the camera and myself with a ghillie blanket over a camo drape. While making my first ghillie blanket, some years ago, I started from the excellent site by Fred Harteau, which provides a lot of useful information about this topic.

You will be amazed to see how this sort of coverage works with many species. Compared to the blind, you get the benefits of increased flexibility and field of view. On the other side, even modest movements may alert our subjects and should be avoided. Local foliage and plants help concealing body movements, making this camouflage even more effective. Of course, these natural resources must be exploited in an environmentally safe way!

Ultimately, feeding can give you some additional advantage, in that egrets may not be immediately aware of your presence. In the two pictures I took in March, the bird was actually going up and down along the riverbank while feeding, and was too busy to notice me. The camouflage described above made an excellent job, and I was able to get a number of shots at close distance. The blue background helped in adding contrast to the picture.

You may note in both pictures the breeding feathers, which typically appear prior to the mating season. This season starts in Italy in April and generally ends in June. During the mating time, the chances to approach these birds are low, as they spend most of their time in close proximity of their nests.

It is necessary to wait for July for these birds to show up again. Summer is not awarded as the best time for taking pictures of egrets. Light can be harsh and direct most of the day, likely to easily burn the highlights. Provided that early morning and late afternoon are the best moments for taking pictures, some interesting results may nonetheless be obtained by carefully checking the exposure.

The picture below was shot in mid-August. The egret was perched at roughly 4 meters from me. The light was not too harsh, and I could get a useful picture out of the camera with minimal post-processing.

In harsh and direct light conditions, correctly exposing the egret may result in a dark background. In these cases, some techniques like layer masking may greatly help restoring the balance between the foreground and the background. I generally use this technique for  over- and under-exposed shots. Needless to say, a powerful technique requires great care in how parameters are tuned, otherwise the final image will look too artificial.

Summer is also the time when some nice, green-colored algae may show up. Those may ultimately form compact platforms, providing the egrets a place for feeding. I often look for these algae, as they also add a bit of color to the background:

By the first winter cold, a number of egrets will move in the search for a mild climate. In some places, nonetheless, there is still the chance to see some resident specimens. Winter is one good season to photograph egrets, thanks to soft, low angle light.

The picture below was shot in mid-December on a cold day and came quite unexpected. I was not waiting for egrets that morning. The sun was rising and some fog started to form all over the water. In such conditions, do not expect to get tack-sharp pictures. Haze may give the image an overall soft look, but also a misty atmosphere, which in the end, may compensate for the lack of detail. This is pretty much what happened with this shot. Pay attention to light reflections on the water surface: they always come as an added bonus during winter!

As the climate changes upon approaching spring, the rise in temperatures helps restore ideal conditions for photographing egrets. The light is still soft, but most of the morning haze is gone. Raw files come out with more contrast and details, and getting decent shots appears far easier than during other times. Overall, I think that February and March might be the best time for egret photography.

Walking to your favorite egret photography site would likely scare all birds in the area and let you with nothing to photograph for some time, until you have camouflaged yourself. This is absolutely natural and should not depress you. Remember that birds are creatures of habits and will return to their favorite feeding places. The main challenge in bird photography is not “where” but probably “when”, since bird’s behavior is unpredictable. Be patient, and over time, you will be rewarded.

This ends our short journey across the egrets’ seasons. I really hope to have raised some interest in this wonderful bird. The shots I have collected here are the result of some years of egret photography. I purposely chose them to show that egrets can be closely approached and are amazing subjects in bird photography.

Besides, I do think that pictures alone can not convey the real feelings one may experience out there, even in freezing days, waiting for such subjects to come closer, while observing their behavior, their everyday life. It is not all about taking good or bad shots. Over the years, one realizes that bird photography is also a great way to spend some time outdoors in close contact with nature.

At least for me, this probably answers the questions I began with.

This guest post was submitted by Mosè Casalegno, a photographer from Italy.