In the 1930s, Life magazine did something radical; while most magazines of the time prioritized words, its editors published pages and pages of photographs, sometimes accompanied only by brief captions.

Over the next few decades, Life’s photographers—Gordon Parks, Margaret Bourke-White, and W. Eugene Smith among them—would help pioneer a new genre known as the “photo essay.” They often photographed ordinary people—families, midwives, laborers, and more—and shared their stories with an audience of millions.

By 1945, Life was the most popular magazine in America, read by an estimated 13.5 million people. Throughout its run, the magazine published 200,000 pages of photo essays, proving that often, images could tell stories, promote understanding, and inspire action at least as well as the written word.

75 years later, the photo essay remains a gold standard for photographers of all genres. While it’s a medium most commonly associated with photojournalism and documentary photography, modern photo essays can take many forms, from newspaper spreads to wedding albums. A photo essay is a collection of images that work together to tell a story.

Photo essays come in all forms, from day-in-the-life series to long-term documentaries; they can feature people, animals, events, or landmarks. They might capture international news and politics or uncover the lives of regular citizens overlooked by mainstream media. They can convey a narrative with a beginning, middle, and end, or they can be thematic, built around a common subject.

Below, we share our tips for how to make a photo essay, separated into eight steps, with inspiring examples from photo history as well as the 500px community.

When finding a subject for your essay, it’s often a good idea to start close to home. Look for topics that are both original and accessible. Follow the local news, talk to members of your community, and keep an eye out for those untold, hidden stories. In 2018, for example, Skanda Gautam, a photojournalist with The Himalayan Times daily newspaper in Nepal, created a remarkable essay on air pollution in Kathmandu. 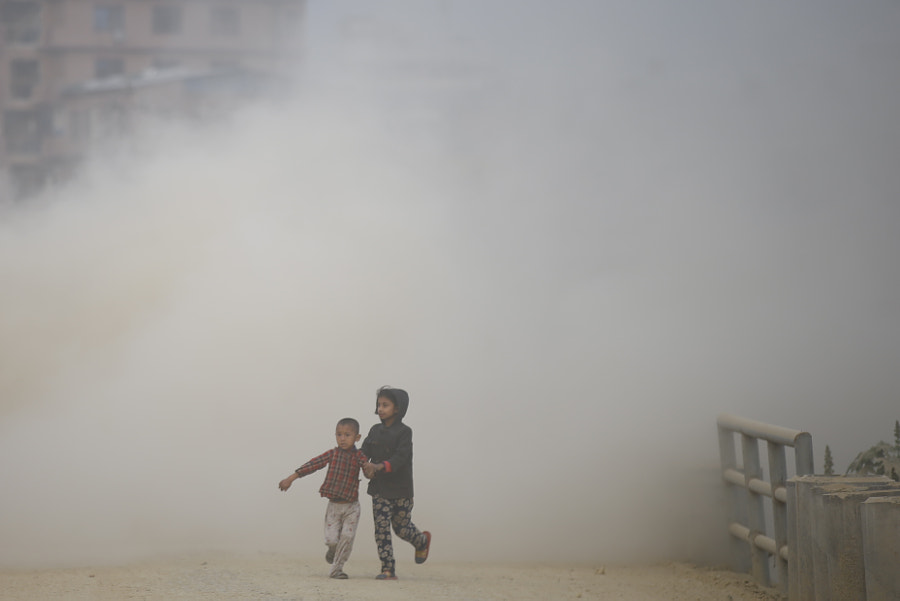 By then, the air quality was so poor that it posed serious threats to the public, and Skanda, who calls the city home, set out to document everyday life for its citizens. He photographed the polluted streets and activists crying out for change; the images were shared around the world, bringing much-needed attention to this pressing issue. 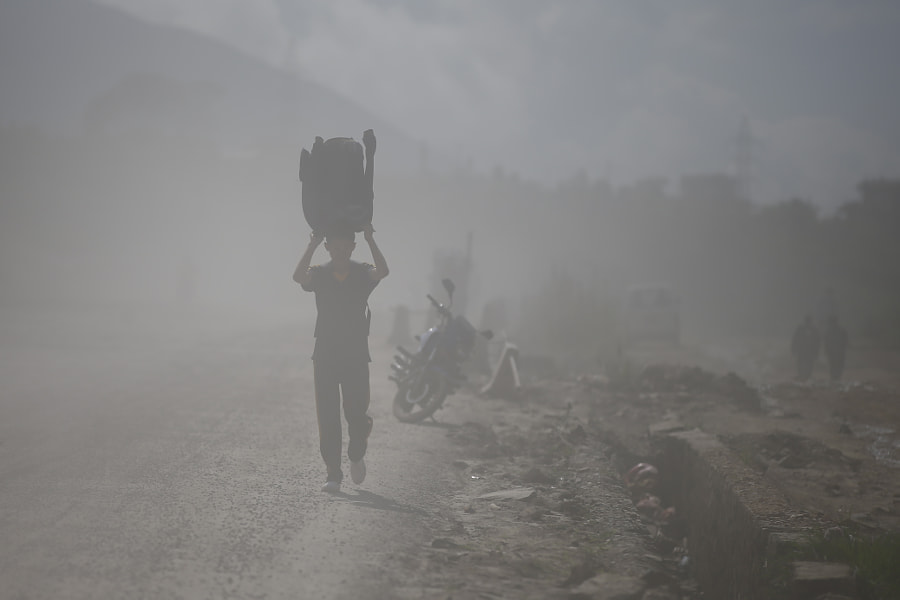 Stories like this one exist everywhere, if you’re willing to look for them. Find subjects that affect you personally or that resonate with you. Maybe it’s a protest taking place in your hometown or a community group making waves in your neighborhood. Once you find a subject that interests you, dig deeper and do some research. Check to see if any other photographers have already covered it, and if not, reach out to the people involved to see if you can learn more.

This news-gathering and research phase might take a while, but it’s the first step toward creating a meaningful photo essay.

When we hear the term “photo essay,” one of the first works that comes to mind is Country Doctor, shot by W. Eugene Smith for Life magazine in 1948. The essay told the story of Dr. Ernest Ceriani, a general practitioner in Kremmling, Colorado, who served as the only physician across a 400-square-mile area.

Smith spent 23 days in the Rocky Mountains documenting Dr. Ceriani and his life’s work. In the beginning, he famously shot without film in his camera; the idea was to get Dr. Ceriani to feel comfortable with him before actually taking any pictures. Eventually, it was like Smith wasn’t even there; he faded into the background.

Trust forms the foundation of every great photo essay, so spend some time getting to know your subjects—without the camera. Take as much time as you need to do this, even if it’s weeks, months, or years. Tell your subject right off the bat what your intentions are, and keep the lines of communication open. 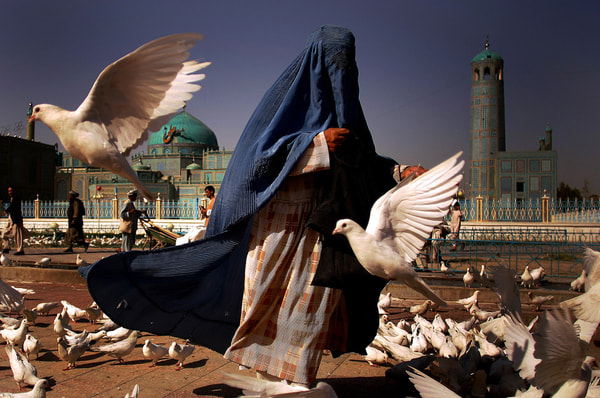 Sometimes, you’ll go into a project with an idea of what you want only to find another story lingering beneath the surface. In 2009, for instance, when the award-winning photojournalist Moe Zoyari was on assignment for United Press International (UPI) to cover the presidential election in Afghanistan, he also took the time to document daily life in its cities. 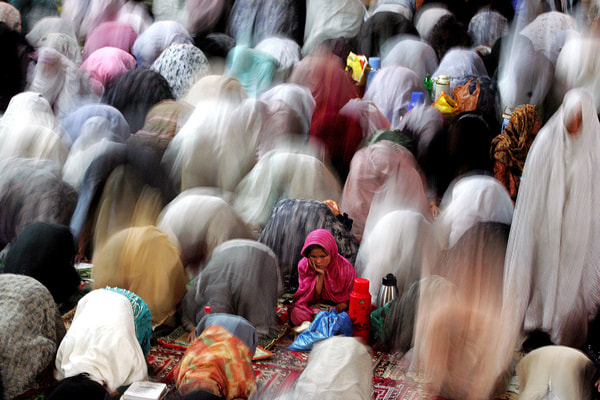 Over 44 days, he discovered a new project, ultimately titled Life After War, about the vibrancy of civilian life and the resilience of the people. He saw the scars of war, but he also found children playing and local businesses thrumming with life. Moe’s series is a testament to the importance of an open mind; allow your instincts to guide you, and take as many photos as possible, even if they aren’t what you originally planned. 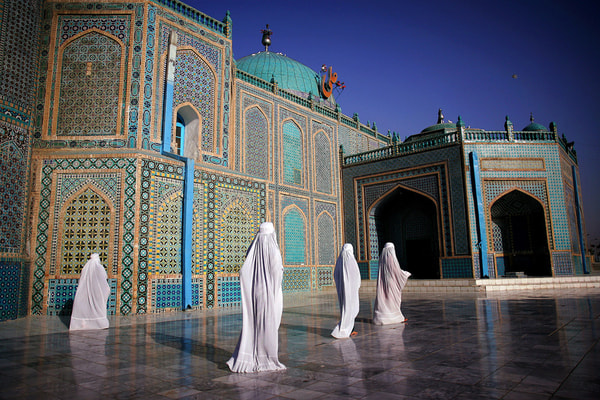 The final story might reveal itself later, when you’re back home at the computer, but while you’re out there in the field, take advantage of every opportunity that presents itself. Look for overlooked details, interesting moments, and unexpected happenings.

We’ve already mentioned the importance of taking as many photos as you can, but you also want to look for ways to make them all different. As the legendary photo editor Howard Chapnick once put it, great photo essays avoid redundancy, and every image captures a different perspective.

For some, that might mean using different lenses or angles, getting details as well as wide shots, and for others, it might mean capturing one subject in many different settings and scenarios. You can combine portraits and landscapes. In short, it’s not just about quantity; it’s also about diversity. 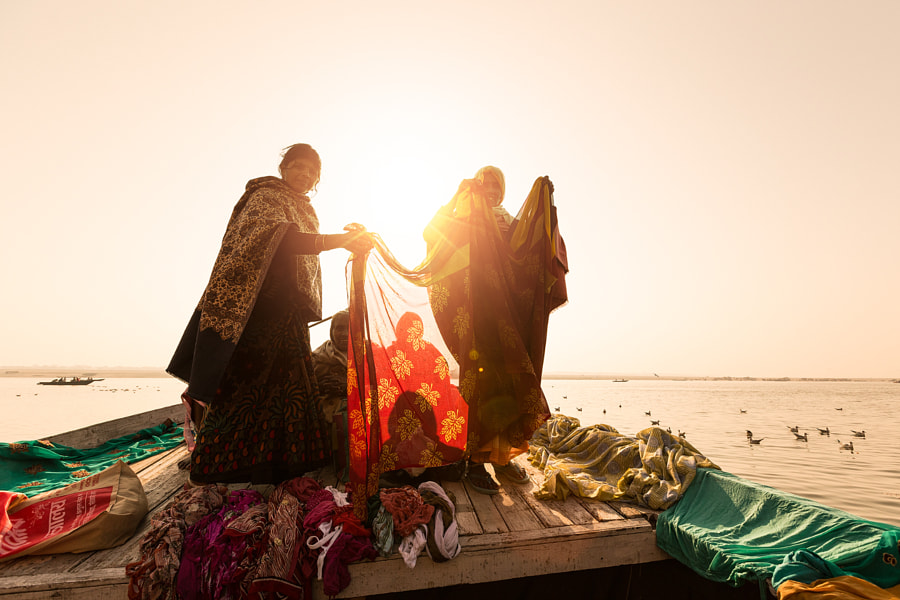 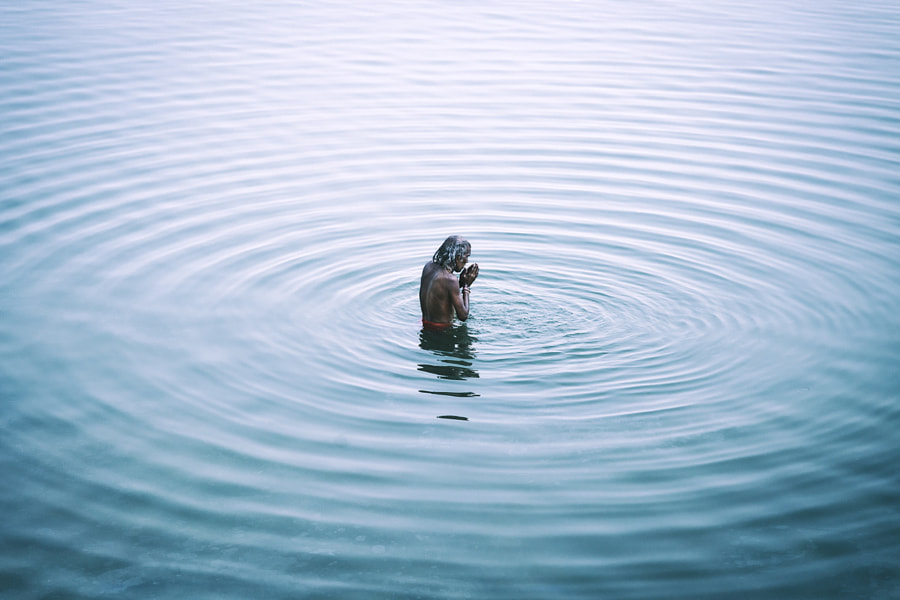 When the Australian photographer Drew Hopper documented life on the River Ganges, for example, he woke up early and stayed out late; he saw a man performing his morning prayers, women doing laundry, and boats heading out at dusk. In capturing all these moments, he painted a dynamic and nuanced portrait of a single place, rich with meaning and layers of understanding. 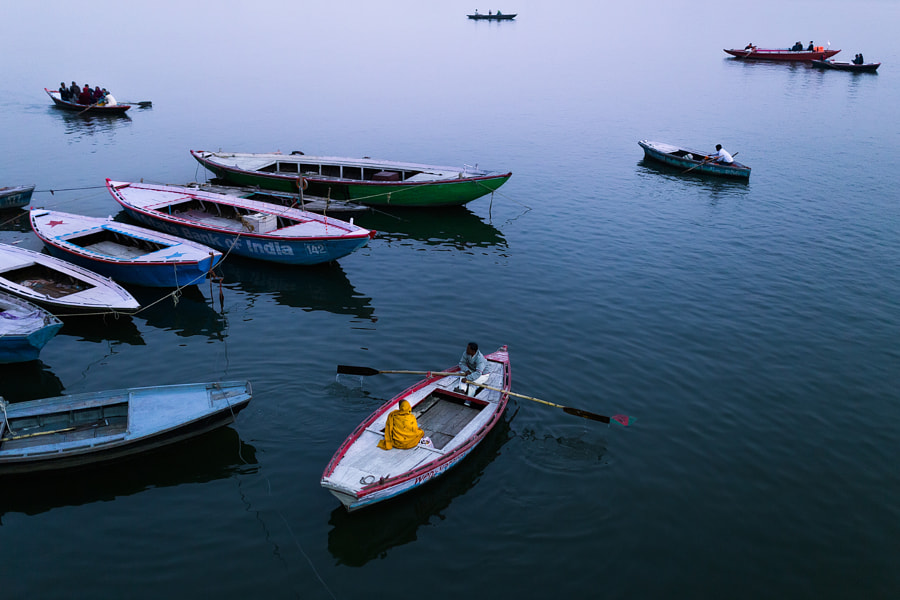 In the heyday of Life magazine, photographers were at least somewhat beholden to editors in terms of image selection and layout. There was only room for a fixed number of images, and because they captured hundreds if not thousands of frames, many had to be cut.

Today’s photographers aren’t limited by the cost of film or limited space; using social media, they can publish as many images as they wish. But at the same time, editing remains at the heart of the photo essay, so be objective and ruthless. Sometimes, the most powerful stories are told with a select few images. Give yourself a number—say, ten to fifteen images—and then try to hold yourself to it.

Cut any images that don’t serve the larger story—or any that feel redundant—and then ask friends and colleagues for their opinions. Sometimes, seeking an outside perspective can be invaluable; you might be attached to an image emotionally, but that doesn’t necessarily mean it’s the strongest of the bunch. Don’t rush the process; take several passes over several days or weeks, gradually narrowing down your images.

Also, keep in mind that even if you cut an image from your essay, that doesn’t mean you have to discard it completely. Parks, Smith, and Bourke-White had countless photos cut from publication; many have been published and exhibited throughout the decades.

Photo essays require an investment of your time, energy, and empathy, so even if a friend suggests you cut this photo and keep that one, the final choice is yours. If you feel strongly about an element of your story, trust that instinct.

In 1961, Gordon Parks did just that. He’d spent weeks documenting the life of a boy named Flavio da Silva and his family, who lived in the favelas of Rio de Janeiro, but when his editors saw the images, they initially wanted to include only one photo of Flavio. Still, Parks insisted, and in the end, he convinced them to publish a full ten-page spread focusing on Flavio and his family. They remained in touch for years afterward.

Trusting your gut can be especially important when it comes to the first and last image in your essay. These are your bookends; one introduces your audience to the subject, and the other leaves a final impression. Make sure to select images that pack an emotional punch and make a strong statement. 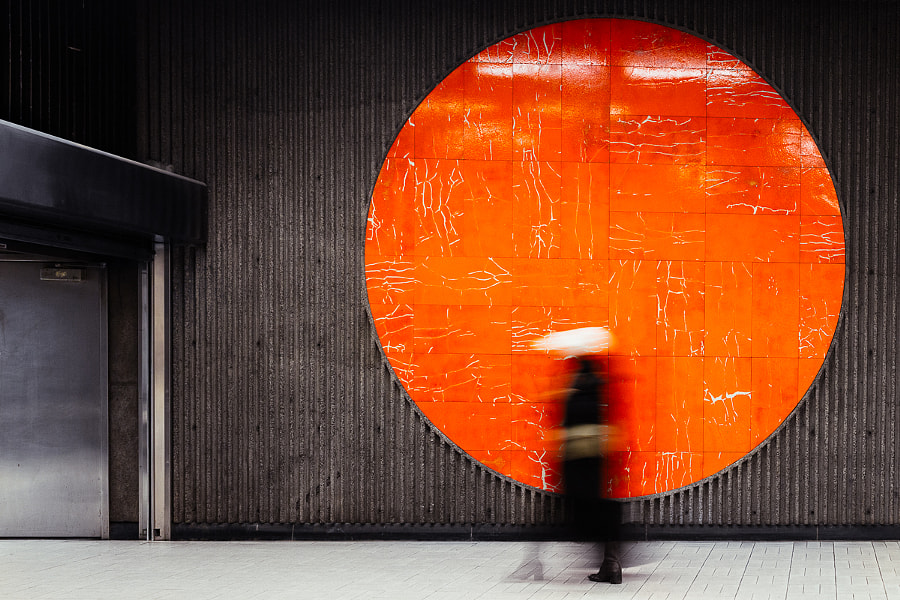 From 2014-2017, the architecture photographer Chris Forsyth created a captivating photo essay about the metro stations of Berlin, Montreal, Munich, and Stockholm. Part of the joy of discovery came in researching their history, designs, and nuances, and his captions always provide insight into the meaning and significance of each space. 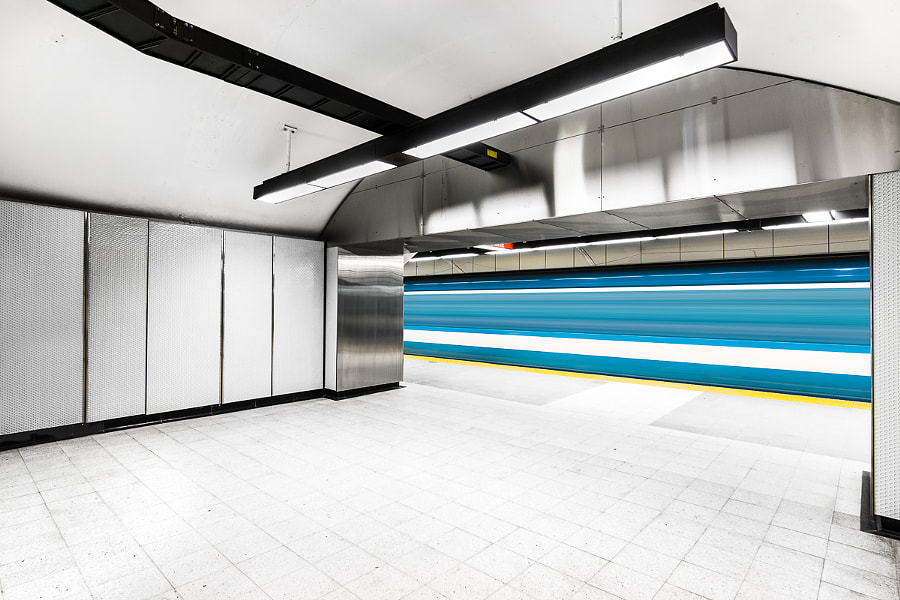 There’s no rule that says you have to include text in your photo essay, but often, captions can go a long way. When documenting your story, keep a journal of some kind where you can jot down locations, dates, and descriptions. If you interview someone, take notes. You don’t have to publish these notes, but they’ll help you keep track of information as it comes. 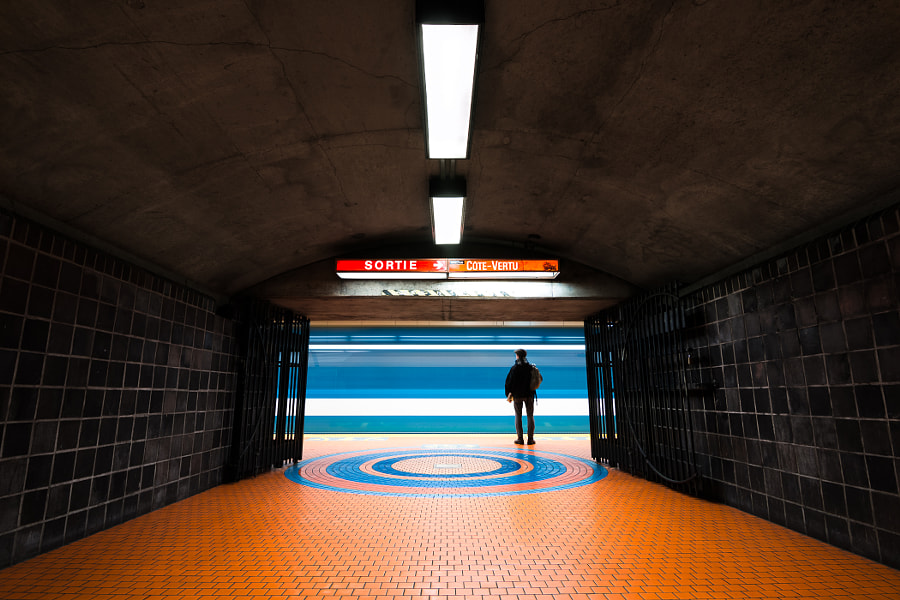 In 1951, three years after Country Doctor, W. Eugene Smith photographed Maude Callen, a midwife and nurse in South Carolina, for Life. The piece inspired readers to make donations and send food; in the end, $20,000 was raised and used to open the Maude Callen clinic and support her work. One subscriber put it this way: “In all the years I have been reading Life, I have never been so moved or affected by anything as by your article on Maude Callen.”

Photo essays still have the power to transform lives, except these days, you don’t need to be published in Life to reach millions of people. Whether you’re publishing with a magazine or sharing your work online, your images have the potential to create change and make a difference, so when you’re ready, don’t be afraid to share them with the world.